Catching up yet again ! 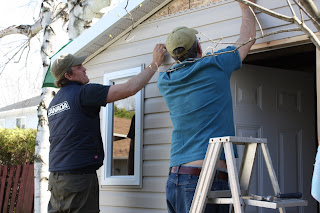 I swear I don't know where the time goes ! There's always something going on that makes the weeks just fly by . The last few years we've been doing quite a bit of renovating inside the house . This year the plan had been to replace the fence surrounding the property . It's old and really just painting and replacing posts and boards just isn't cutting it anymore. Well , Mike decided that a new garden shed/storage area should come first . So the last couple of weeks have been occupied with demolishing the old one and building the new one . I have to say that it's really handy to have a carpenter in the family . Max has been the driving force behind the construction with Mike and Casey being the extra muscle . Well , it's almost done , just the siding and roof shingles left to install . We just need the weather to cooperate . Max has another job over the next 2 weekends , so his time will be limited to a couple of hours after work . My part in all this has been to provide the meals , so the family have been here for dinners more often than usual lately . So it's back to me being mom's restaurant for the time being ! As for the fence, well the budget has been blown , so it's back to fixing it up to last just one more year ....


Wednesday I had an appointment with my family doctor . He's seeing me at 3 month intervals for this year to keep track of my progress with the weight loss and my goal of getting off the medications for diabetes and high blood pressure . He'd received all the results of the latest blood work and I'm happy to say that at least the of the pills for high blood pressure has been reduced with the probability that I'll be able to gradually stop taking it altogether. I'm down 10 pounds , but I need to lose at least 10 to 15 more pounds in order to stop taking all the rest . I'm exercising by walking at a good clip for about 2 to 3 miles every day or every other day . I usually average about 8 miles a week . I'm feeling a lot better and am more hopeful than I've ever been about losing weight and keeping it off . It's slow progress but it IS progress . 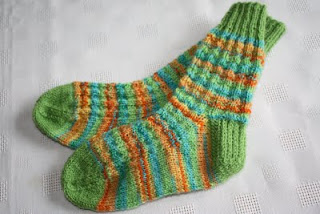 I have done some knitting during the hockey playoffs . Too bad that Habs didn't advance to the next round , but there's always next year . Now we can cheer on Vancouver ! Anyway I did finish these socks for the Warm Hands Network and one more pair is almost completed .I'm halfway to the toe decreases . I need to get them finished by tomorrow so that I can post them to the sock KAL for April .

I've been away from the blog for so long that it's hard to get back into the groove . I'm still in kind of a funk , probably due more to our crappy weather than anything else . I'm waiting for Spring , not so patiently . Don't know how many more grey , rainy , cold days I can handle . Tomorrows forecast , snow , freezing rain and very windy. Calgon take me away !

Just a small rant about the price of gas . I went out earlier to buy some Easter goodies for the grand kids and couldn't believe today's price at the pump , a whopping $1.43 per litre which translates to roughly $5.74 per gallon for those not on the metric system. Yesterday afternoon it was $1.28/litre . A 15 cent per litre increase for no discernible reason . What's up with that ! Just plain greed if you ask me . Here in Quebec we've seen about a 15 to 20 % increase in price since last year . That's mostly thanks to our lovely provincial government who applies a pretty hefty gas tax . Don't get me started on those bleepity bleep idiots . If I could vote them out I certainly would . The only problem here is that the alternative (sovereignists/separatists ) might actually be worse . Okay , rant over ...

One sign of Spring is the hockey playoffs . Our Canadiens have made it into the first round of post season play again . Keeping fingers crossed that they survive the series against Boston . If not I'll cheer for whoever is left standing . I would love to see the Stanley Cup come back home to Canada though ! If not the Habs , maybe Vancouver !? 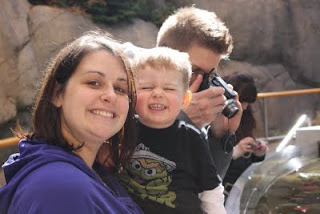 I couple of weeks ago I played tourist in my town . I went to visit the Montreal Bio dome with Casey , Chantal and the kids . Yep even 10 day old Stella had a field trip . That's the kind of thing you absolutely have to do with an impressionable 2 1/2 year old . He just couldn't get enough of the animals ! I think he would have done the tour a dozen times if we'd let him . Stella slept through the whole thing .

As for the knitting , there's some finished knits , some almost done and not unexpectedly something new on the needles . I've been spending more time reading these days than knitting . I guess I'm an all or nothing kind of gal . The hockey playoff should up my knitting productivity . Yet another reason for wanting the Habs to do well ;-)) ! 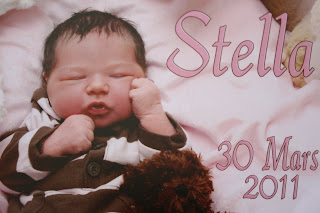 Stella Mackenzie Grace finally arrived last Wednesday afternoon March 30 , 2011 at 1:44 pm . She kept us waiting for a couple of extra days but we're so happy that she's here and healthy . The delivery went well and she weighed in at 9 pounds even . Mom , Dad and big brother Jessey are really happy to have this sweet little addition to complete their family . You can bet that her grandparents are also tickled pink to have a little granddaughter to spoil ! 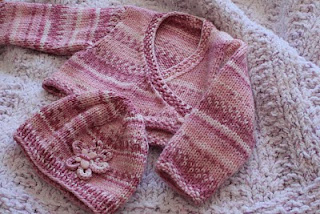 All of the knits that I had on the needles for her were finished in time for her arrival . I finished the hat at about 2:00 am the day she was born . Talk about cutting it close !