Omi's first cupcakes ! Not too bad for an amateur , if I do say so myself ...
﻿﻿ Tomorrow is Stella's second birthday and the family is coming over for brunch , Easter and birthday celebration all rolled into one . I'd thought of making her a traditional birthday cake but came across a very nice recipe for vanilla cupcakes . The cupcakes in the recipe were decorated with Easter colours and it got me to thinking that maybe I should try to make these instead . I have the cutest little butterfly picks that will go on top . Stella has butterflies stenciled on one wall in her room so this is just perfect for her .  I'm pretty happy at how they came out ....

Coming up for air

OMG it's already been a month since I last posted ! There's been so much going on . First , we're going to be grandparents again . Max and Stef are expecting their second child in September , making it grandchild number 4 for us .  Needless to say I've already started knitting for this little one . I cast on this blanket almost immediately after they announced it . The colour is very spring like and the pattern is just a dream to knit . I have some coordinating yarn in the stash so I'll be able to knit a hat and some bootees to match . Stef will find out the gender at the end of April ! I've been searching ravelry for baby knits and have added to the queue , the ever expanding queue . Would that I could knit as fast as I add to the queue !

﻿ The second bit of news is that Mike and I are going to Florida for a month , Cocoa Beach to be exact . We haven't had a proper vacation for years . We could both really use a break and are anxious to have some nice weather . Winter was back here with a vengeance this week and dumped another 35 cm of snow (just over 12 ") .  If it had been December I'd have welcomed it but at the end of March , enough already ! We're leaving the week after Easter and will be back  the second week in May . We're driving down , something that I'm dreading , but the reward will be sun and sand at our destination . We 've rented a third floor condo with a gorgeous big balcony that faces the beach . I can hardly wait to dip my feet in the ocean ! 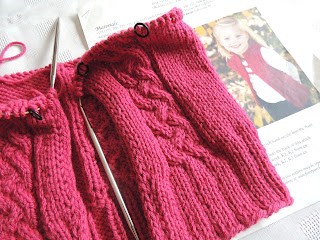 It's been non-stop this past month with all the preparations , taxes , insurances and a myriad of details that needed attending to , that knitting time has been at a premium . That didn't stop me from joining Kellys' (Celtic Cast On ) Business Casual  sock KAL . I don't know what I was thinking ! I also decided that Stella needed a vest for her birthday which is March 30th . The logic being that a vest doesn't have sleeves so it will be a quicker knit than a cardigan . I have another week to finish that and the sock KAL ends on March 25th which is next Monday . I have one sock completed and am working on the cuff of the second . The vest is further along than indicated in the photo . The back is almost done , but  there's still the sides , collar and buttons , which I haven't bought yet .Yikes , I'd better get cracking !