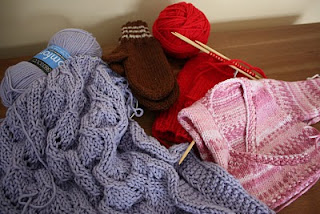 After January's really good knitting output , February has brought a decidedly lacklustre showing . Lots of things started , nothing finished .There were only 2 small projects completed , those little brown mittens and a pair of socks for the WHN from a previous post .

The blanket needs tinking back about 6 rows to correct a mistake that I just didn't see until it was 6 rows behind me . Probably no one else would notice the error , But I see it , so tink it is .

The red mittens are a thumb and the top of the hand away from completion . These are made from a skein of my Briggs & Little stash . I'm not loving it , it's rough and feels horrible when I knit with it . I bought a bunch of this stuff on a trip to New Brunswick a couple of years ago . A lot of people swear by it for mittens, hats and socks , but I hold off judgement till the mittens have had a wash .

The baby sweater needs the second sleeve set in , the side seams , snaps for the closures and a button sewn on . I just don't enjoy seaming and am my own worst critic . To seam that one little sleeve probably took me the better part of two hours . 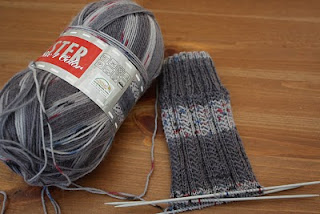 With all these works in progress , what did I do last night while watching the Oscars !? Yup , that 's right , I cast on another pair of socks . I really like knitting socks and the best part , no seaming . Maybe knitting these will bring back the motivation to get the other WIPs done , or not ....
Posted by Frieda at 2/28/2011 03:21:00 PM 4 comments: 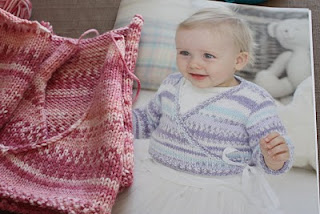 I got sidetracked again ! After a look at the calendar last week it dawned on me that our expected granddaughter is due to arrive in a little over 4 weeks . It also occurred to me that she doesn't have a hand knit sweater yet . Never mind that a blanket for her crib is almost done and that I shouldn't really start another project till that's done , I could only focus on her lack of a sweater . What's an Omi to do except head out to her local yarn shop , pick out some really cute yarn and cast on . The knitting was a piece of cake , it is a small sweater after all , but the seaming and finishing was kicking my butt . After some refresher courses via you tube , the finishing is getting there . The shoulders are seamed , the borders are knitted on and the pieces are blocking for the final assembly . I won't have time to do it tomorrow , but maybe Thursday will see a completed sweater . Then the blanket will get back to the front of the line ...
Posted by Frieda at 2/22/2011 06:24:00 PM 3 comments: 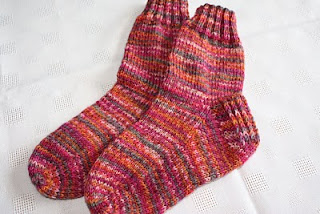 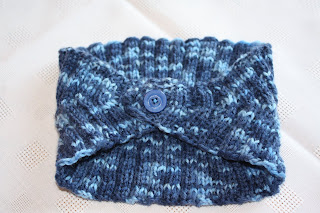 This is it , the sum total of my knitting over the last week or so . Like everyone else on the eastern side of the continent we had a fairly big dump of snow last Wednesday. Since then we've had an equal amount dispersed in smaller quantities just about every day . All of which has added up to an awful lot of shoveling . The up side is that the skiing has been phenomenal . When we're not shoveling or skiing , there's been baby sitting , Mike's birthday which was celebrated on three different days last week with all the attendant hoopla , and a Super Bowl party . Let's just say I'm too tired to pick up the needles lately. I didn't even turn on the computer for four days , which is very unusual for me . Today I've stayed in my pj's and had a down day . I picked up my blanket for Stella and did a pattern repeat or two . I should be able to get it done by sometime next week if , big if , I don't start something new .

In case you're wondering the socks are pair #4 for the Warm Hands Network . They're knit with Regia Mosaik 6 ply . On the right is a Calorimetry which I knit for me. The hat I usually wear for skiing was too warm sometimes and I thought this might be a good solution . I wore it on the weekend when it was a little milder , it was perfect . 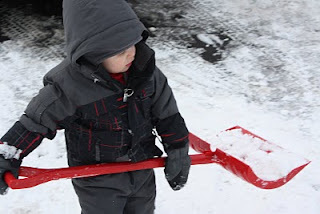 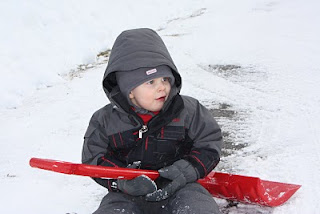 Here's a couple of pics of Omi's little helper . The snow plow very obliging made a hill of snow at the end of the street and Jessey had a blast sliding down it , then having a snowball fight with Grandpa Mike .
Posted by Frieda at 2/09/2011 04:25:00 PM 4 comments: