That's December for you , rolling , rolling rolling along sort of like a wave in the ocean and I'm kind of tumbling along with it .  It hit me today that there's just 14 days left till Christmas . I was feeling kind of happy with how my holiday preparations were going , after all the shopping is done , most of the knitted gifts are coming off the needles , the lights are up outside , some of the decorations are up inside. BUT and that's a really big but  , I haven't even started the holiday baking and planned the meal for Christmas Eve which is when my family celebrates Christmas . Then there's still the cleaning and wrapping of the presents , cards to be mailed out and probably a bunch of other stuff I 've forgotten about . I WILL not panic YET !

Yesterday I decided to start on the baking and attempted to make some spritz cookies . I've always thought that spritz cookies look so pretty and festive and I wanted to add something new to my repertoire . I'd never realized that using a cookie press is more tricky than it seems . Let's just say ,after a couple or twelve attempts that it didn't work out as planned and that darn cookie press will be finding a new home .Then I thought I'll just start on my absolutely- must-have- it- wouldn't- be- Christmas- without -them vanilla kiferl . Apparently grinding hazelnuts for the dough was a challenge also . I always buy them already ground but this year I couldn't find them anywhere . After trying to grind them in a variety of my small appliances , they weren't really fit to use in the recipe .I could possibly salvage them by using ground almonds instead and then adding a bit of the hazelnuts but that's for another day . I need to recover my disastrous day of baking first . 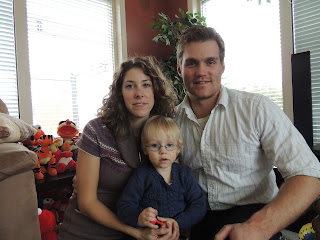 The BIG news , at least knitting wise  , is that I did finish Masons' sweater in time for his birthday . Here he is sporting it after opening his gifts last Saturday . I wish that I had knit a bigger size  (4 to 5 ) but at least he'll wear it this winter and spring . He's growing so fast ! I'm fairly happy with it , my finishing skills are improving but seaming is still my least favourite part of a project . 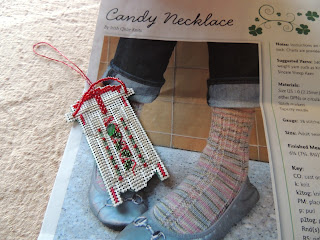 Some  nice things to write about are two bits of mail that I received recently . The first was from Dee which included a pattern for some socks that I had admired on her blog and she included the little sleigh cross stitch ornament that she'd recently finished . This was really wonderful unexpected act of kindness and I was so touched that she would send them . the ornament will have pride of place on our tree . Thank you so much Dee !

﻿﻿
This was my second bit of nice mail . Aren't they gorgeous , the photo doesn't do them justice ! I was so happy with my last purchase at Valeries etsy shop that I snapped these two up as soon as I saw them . I told Mike that he was buying them for me as an early birthday gift  ;-)) .  No plans for them yet , I 'm just enjoying them as is for now .