Why is it that the weekends seem to pass by so quickly ? Even if you're retired  they just fly by . Now that Mike and I are up in the wee hours with our grandson Mason from Monday to Friday , I'm finding that I really look forward to the weekends so that I can sleep in a bit . And here it is Monday already and the last day of April to boot .

We had a fairly quiet weekend with some catching up on the yard work , shopping and Sunday brunch with the family . I have to admit that it was Mike doing most of the yard work as my back is still not 100% . I'm getting there but don't want to push it too much . The weather has been cool and rainy . Disappointing after that gorgeous weather we had in March , but c'est la vie .

We saw a couple of movies on Saturday night . We rented the last Mission Impossible , Ghost Protocol , not my choice , but it was an okay movie .If you've seen any of the previous ones you know what to expect , lots of action , predictable plot with the usual assortment of bad guys . I really got a lot of knitting done on my April socks during that one . The other ,  Moneyball with Brad Pitt , was on the movie network and it was actually better than I expected . I have to say that I enjoyed it . Yesterday we had the family in for our almost weekly Sunday brunch . I don't mind getting up early to prepare it , it's nice to have everyone together , but best of all is when they all leave because the rest of the day is mine to do with what I like . I love Sundays ! 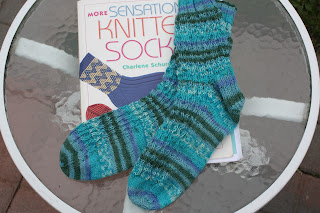 I found myself a little wind sheltered corner out in the back yard and finished off these socks yesterday . I was anxious to get them off the needles because I have some new knits in mind . I've been searching ravelry and tossing the stash trying to match up patterns and yarn . So many ideas , so much yarn and so little time ....

Quick little post to thank everyone for their comments and kind words on my last post . After a week of rest and taking the meds my back is on the mend . I still have a ways to go before I'm back to normal but at least there's no more  unbearable pain . I'm under strict instructions from the family about not picking up the little ones , no matter what  . The upside of this has been that Mike is picking up the slack when it comes to the housework and cooking the meals . We've had takeout more often than usual . The downside of the recovery is that sitting too long is still painful so there's not been very much knitting going on  . So walking , weather permitting , and reading are what has been keeping me sane this last week . Oddly enough , walking doesn't seem to bother me too much but , man , do I seize up if I sit for any length of time .

Knitting progress has been slow on both the socks and the stash busting shawl . I've also been itching to cast on for something new and have checking out patterns on ravelry every chance I get . I've been going through all of my yarn and trying to match up patterns and available yarns from my stash looking for inspiration . No success yet , but some definite possibilities . 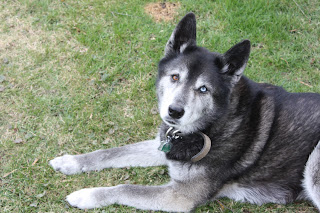 A trip to the ER

Last Friday afternoon while I was playing outside with Mason , I ended up injuring my back . I was picking him up so that he could go down the slide when I felt a kind of a pop in my lower back area . It hurt like the dickens at the time but after a bit the pain was less severe . I figured a couple of Tylenol would do the trick . Saturday when I got up the pain was worse but still the Tylenol was helping along with a couple of Voltaran applications , recommended by the pharmacist. Well by Sunday the pain was intolerable . I couldn't walk , sit or stand without experiencing excruciating pain . Even lying down didn't offer any relief . It was the worst pain that I've ever felt .

Mike wanted call an ambulance but I wanted to get washed and dressed and get there under my own steam . The 10 minute ride to the hospital was absolute torture . The triage nurse after taking my blood pressure which was sky high by then , gave me a pain killer . It took the edge off , but the pain was still unbearable . Fortunately , I didn't take too long for me be seen by a doctor . After having an x-ray, the conclusion was that I have arthritis in my back  but  that I most  probably tore a ligament or have another internal injury that can't be seen by a simple x-ray . If this pain persists I'll have to go back for an MRI . In the meantime he's put me on some major meds for pain , some muscle relaxants and anti-inflammatory pills. I'm seeing my family doctor on Wednesday as it turns out and since he's affiliated with the local hospital , he'll be able to see the results online and judge for himself  about the diagnosis . Once the pills kicked in I had much less pain , but they knocked me right out .

I'm feeling better today , mostly thanks to the pills . I can't stay in any position for too long before everything starts to seize up and the pain gets worse again .Anyways we'll see how it goes after a few days rest and a course of anti-inflammatory meds . I'm really hoping that will do the trick . 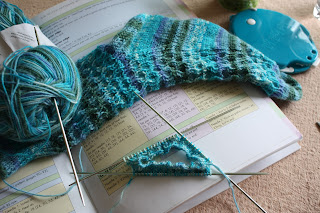 All that medication has me somewhat loopy and not able to focus , but I did get some knitting done this am . I finished off one sock and started the second . I'm not very happy with the yarn as there have been 5 breaks and knots throughout the skein so far . Most of them were at the same point in the colourway , but the first one was not . Hence these will be fraternal socks because I can't be bothered trying to figure it out , I'm just going with the flow .
Posted by Frieda at 4/16/2012 04:39:00 PM 4 comments: 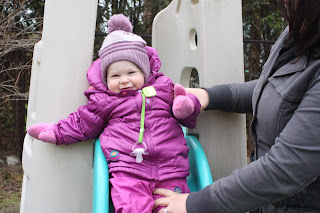 The actual holiday was yesterday but we had the family in for Easter brunch on Saturday . The kiddies made out like bandits with tons of chocolate , candy and Easter eggs , some new clothes , toys , namely a doll for Stella , tricycle for Mason and Jessey got a new DVD (Chipwrecked )  and a bubble maker . The tricycle will actually be kept here so that Mason and Stella can both use it . Our street is very quiet with not much traffic . Since all of them are here often it made sense for me to keep it here . This house is starting to look more and more like a daycare  according to Mike . It's been cool and overcast for the last couple of days , so it was an Easter egg hunt with everyone well bundled up . They all still had fun and enjoyed playing outside . 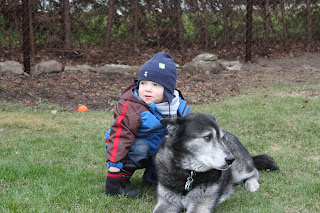 Last week we had a new fence installed . The old one was beyond repair and finally bit the dust . You can see the back section in the photo of Mason and Alaska . It's a chain link fence , so low maintenance and it should last a long time. To save a bit of cash Mike and Max tore down the old wooden one and we installed the privacy slats on three sides ourselves . We're really happy that it's done . The next big project for this year will be a new roof . Another job for Mike and sons . This will have to wait till the fall . The bank account needs replenishing ... 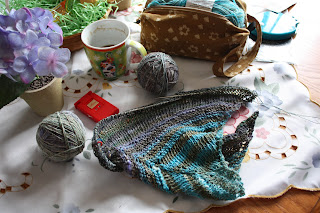