It looks like I skipped February and went directly to March . February was just one of those months you would rather forget . It was a month filled with babysitting sick children and then both Mike and I came down with a rather nasty flu bug. Suffice to say , February glad you're gone , don't let the door hit you on the way out .

That's not to say there weren't some good moments , most of those came by way of knitting . I started to tidy up my knitting basket and came across a couple of almost finished knits . One of those were these were the Susie Rogers Reading Mitts .All I had to do were the last couple of rows and the picot edge bind off of the second mitt . They had been sitting there for almost year , shame on me . 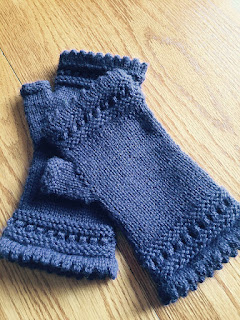 The other one that  found I worked on but again did not complete :-(  was the  Burton Bear cowl . This is just one of those projects that I really can't get into it just annoys the hell out of me . The reason being that the pattern is not very precise on sizing and it seems to be hit or miss with the fit . It is written for baby , toddler , child  and adult with the difference being four stitches between each size combined with one size up in needles . The first one I knit for my almost two year old  granddaughter Charlie didn't fit her at all . It was the toddler size and it ended up being more like a balaclava . She hated it and refused to wear . Now I am knitting the child size , it doesn't seem that much larger and I am wondering if it is even worthwhile finishing it . I paid for this pattern but find it to be very badly done , not enough info about the sizing . There are many free patterns that are better written than this one .

One project that finally did go right was my shrug for Stella . This was another reknit . I guess this will be my year of re-knitting , lol . The first one also didn't fit , it ended up being too small . I made it a size larger and it is perfect , yippee ! 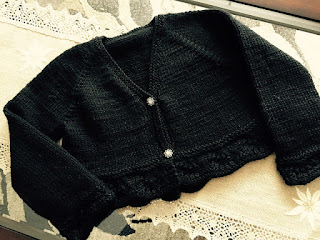 The month of March is starting out much better . So far I have finished a finished pair of socks except for sewing in the ends and then taking some photos . There is also this hat in progress . It is for my DIL Stefanie whose heritage is Irish and her birthday is March 14th .She is very proud of her Irish roots and her family is very involved in the Irish community here in Montreal . It is a little further along than shown in the photo . Stef has been asking for a hand knitted hat for awhile now . I am so happy to have found this pattern . I love it and plan on making more for the family . They usually attend the St Patrick's day parade every year . 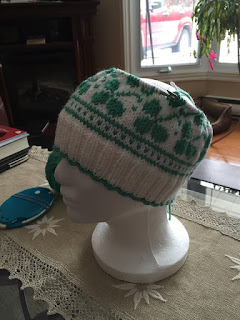