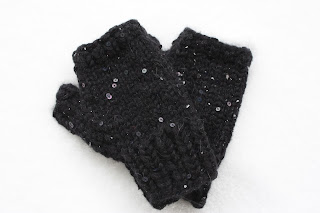 ... with novelty yarns ! I finished the fingerless mitts for Dana . I 'm really really happy to have knit them for her . She's had a rough time of it lately and deserves a little something . I just can't bring myself to say very much positive about the yarn except that it sparkles very nicely . I know that I was knitting these on smaller needles but jeez louise this yarn is a PIA to work with . I knit Stellas' scarf with 7.5 mm and still didn't like it .

Also off the needles is yet another frilly scarf for another friend . That makes eight knit up since last fall . I forgot to take a photo but it's pretty much like the others except it's red and purple . I'm getting faster at knitting these ; It only took  about 2 1/2 hours for this one . Still it will be the last one for awhile . 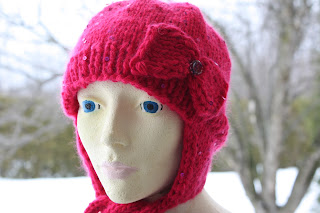 My knitting mojo has been missing of late . I think in part due to this hat , I really don't like this yarn , except for the sparkles . Chantal had requested a hat and scarf set for Stella . I fell in love with this pattern and found the yarn used for it at Micheal's . Trouble was that Chantal wanted an ear flap hat because Stella will not keep a hat on her head unless it's tied on . I modified it to knit top down but used the sizes used in the pattern as a guideline . I couldn't quite get gauge no matter how many needles sizes I went down , so I find it a little on the large side . However the hat that Stella is currently using is just about the same size so I think it will do . Stella is already wearing the matching scarf . I couldn't get it away from her when she saw it , like her Omi she was quite taken with the sparkles . Little miss also is a difficult model who will not sit still no matter what , so no photos yet .

There's not much else to show knitting wise .So much has been going on around here , but I 'm hoping that it will all settles down soon . Nothing bad , just super busy with the grandkids and life in general . I never thought retirement would be this hectic . I have to finish the second of a pair of fingerless mitts that I'm knitting for a friend . Using this very same Dewdrops yarn as the pink hat . They should have been done weeks ago , I just couldn't bring myself to work on them . The Smittens are coming along , I have an even dozen finished . There's also a sock on the needles , begun in December , but still not done . So of course I cast on for something new  . It's a secret so more about that later . I DO like this latest knit and would knit it on all the time if the UFOs in the basket weren't making me feel so guilty about not turning them onto FOs .
Posted by Frieda at 2/15/2013 02:35:00 PM 1 comment: