It really feels like Spring is not far off . We've had glorious weather and the snow is melting away . Yay ! 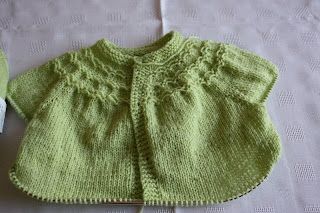 Last week wasn't too productive knitting wise . I've started on the sweater for Shirley's expected grandson . Yes , they're having a boy . Shirley got the news on Saturday evening . Her son lives in BC and they had an ultrasound done in Edmonton where Robyn's family are . Shirley was able to see the ultrasound being performed via the Internet . How amazing is that !

Other than that there's not much exciting going on here . I've started on our income taxes , a most depressing task , since you see in black and white how much money the taxman taketh . We've been lucky because in the last few years we've not owed more and got a refund . The reason being that more comes off Mike's payslip for Quebec taxes . It's always hard to scrape the money together when you owe them so we decided awhile ago to pay more right at source . It leaves less take home pay but at least we're done with it at tax time .

Mike and I went out to dinner on Saturday night , sort of unexpectedly . We'd intended to go see " The International " but I messed up on the theatre showing so we made lemonade out of lemons and went out Cafe Maurizio . This is a tiny Italian restaurant not far from the cineplex that we discovered quite by accident last year . The food is delicious , not too pricey and the desserts are HEAVENLY . I'll try to get the movie right next time , wink wink ....

Yesterday the accountants put me in a funk. I always get a refund, T pays in since he's self employed. His income went up 34% last year, and his taxes went up 250%!!! He owes a big amount, so now I have to worry about how to pay that back.

I haven't seemed to get a lot knit lately. This weekend may be different. The Oldest One is in a curling tournament, so I'll be able to knit on some socks at that.

I'm glad you could make something nice of a night out, those unplanned moments are often extra special. The baby jacket looks lovely, of course it being green, I like it a lot! :o)