A pain in the neck !

As predicted it's rained most of this week . It's just as well because I've been feeling a little under the weather since Tuesday , so all the garden plans were on hold anyways . Occasionally I have episodes of neuralgia . In my case it's the the trigeminal neuralgia giving me sharp shooting pains at the back of my head just behind my ear . Painkillers are of little help , so I have to wait it out and hope it disappears on its own . These episodes can last anywhere from a couple of days to a week or more . I don't know what brings it on , could be that I caught a draught which triggered some ear pain . I can tell you that it's awful and I'm really hoping it disappears soon . It's kind of wearing me out . 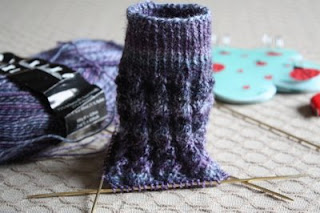 Anyway , enough of that . I'm working on my socks for May . Sock #1 is done and here's my progress on the second one . I don't know why these ended up at the bottom of the knitting basket . I don't normally have socks as UFOs , usually it's bigger and more complicated projects . Apparently these were started in 2006 , so I guess it's about time they're of the needles.

Sunday will be Jessey's christening , so I'll be able to get photos of the baby sweaters . Mike is off next week and apparently at least the first few days promise to be sunny , perfect for the garden work . I just hope this pain in the head and neck is gone by then :) !

Hope your neck is feeling better soon and that it is not preventing you from knitting!

The socks are looking good and deserve to be out from the bottom of the basket!

I'm itching to get working on my veggie garden. I have a lot of clearing to do, but it has been raining here all week, too. We were hoping to get our camper set up this weekend, but it's supposed to rain, so we're going to wait. We got the temporary permit today, so we have 30 days to get it moved out to the campground.

Love the socks! They've been around awhile. Hope you are feeling better soon. :)