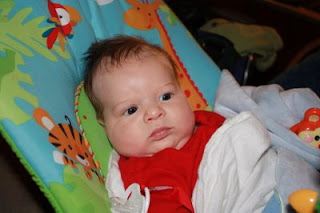 It seems another week has just flown by . On Saturday evening I had the opportunity to babysit my little grandson for the the first time , all by myself . Casey and Chantal left him with us so that they could go out for dinner with her family to celebrate her uncle's birthday . I had so much fun with him ! He's a very happy baby , especially when his tummy is full . I couldn't believe the appetite of the little guy and he sure lets you know when it's time for another feeding . I must have done a good job because I have him again on Friday morning . Yippee ! 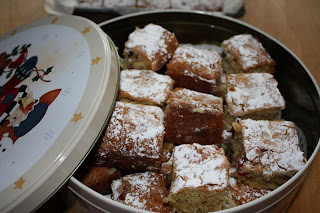 On Monday I went on a baking spree . I'm trying to get at least a few goodies done up before the holidays . Aside from these marzipan bars , I baked some cranberry pistachio biscotti (so good with tea ) my vanillekipferl (hazelnut cresents ) .I even managed to get some mushroom appetizers into the freezer . The house smelled just so wonderful . Now it's the battle to not eat them all up before Christmas . Mike has discovered that marzipan bars don't take long to defrost .

Knitting has been aided and abetted by all the TV news watching of the lunatics up in Ottawa . Life wasn't worrying enough with all the bad economic news worldwide , now we have to worry about the repercussions of Stephen Harper's power at any cost politics . Despite what you might think about this coalition government idea , at least the debate should be on the merits of the economic plan , which Mr. Harper seems to have completely forgotten in this frenzy of separatist , socialist taunting . He was quite willing to work with the Bloc Quebecois when it suited him and he's completely lost sight of the fact that we have a parliamentary system of democracy which includes an opposition whose job it is to essentially keep the government honest and represent all the citizens interests not just those that voted for him . He has a minority government and refuses to act as such . The issue of the funding of political parties to the tune of $1.95 per vote , despite the idea that it is unnecessary , especially in economic hard times , is actually a part of what helps us stay a democracy by having political parties funded not only by special interests . I'm a quebecois by accident of immigration and a very proud Canadian (usually ) .That's being sorely tested these days . I think that the conservative government continually focusing on the separatist issue is just making a terrible situation much worse . It's feeding into prejudices and regional differences and forgetting completely the real issue . To steal a quote "it's the economy STUPID " ! Sorry about the rant ... 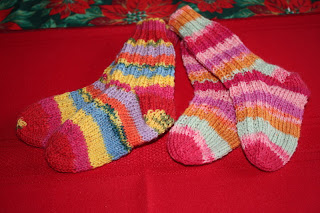 How cute is that little one?!

I can almost smell your baking way down here in NS, the picture looked so good!

As for the rant, I am not a political person and this kerfuffle just helps reinforce why I don't like politics. Get over yourselves, I say!

What a little cutie! Nice socks, too. I don't Christmas bake cuz I'd probably be the only one to eat it. I may make a loaf cake or two. Most likely I'll take half of it to work. They like it.

I don't listen to the news very often, but I did hear something about overthrowing Harper on the radio. It's all so silly. Why the heck did we even have an election in October? They think things are bad now. It's all the same to me except the dollar was up over the US for a brief period, now it's down again. Gas and oil are down, that's about all that really concerns me. I figure one political party is just about as bad as the other.

A the cutie pie! :o)
You are better than me, I haven't even started baking yet. Have all the ingredients on the table, but no urge to get going. The socks look lovely.